More often, I’m seeing the phrases ‘shallow testing’ and ‘deep testing’. These to me are problematic. Shallow testing used in this way to suggest that simple functional testing (potentially automated) is trivial. Deep Testing, on the other hand, requires going beyond the superficial and delving into the product often at a technical level. An example of each would be, testing at the GUI level,(Shallow Testing), removing the covers and performing testing under the surface(Deep Testing)

Right now I’m with a client and I’m performing functional tests that have been written in a test case management tool. I specifically avoid any kind of investigative testing. I perform the test and I pass or fail the test. Is this testing confirmatory in nature? Yes! and what’s more, this is providing huge value to my client.

There’s nothing trivial about it and by using the word shallow it dismisses the importance of this type of testing to a stakeholder. There is nothing like a functional test to give confidence to a business user that the product is ready to go.

There’s something else. These tests are often essential beginnings to discovery. When you have a largely unknown problem space that needs exploration, we first need to make sense of what we are working with. In David Khlar’s book “Exploring Science: The Cognition and Development of Discovery Processes” a common heuristic was to confirm an initial hypothesis which allowed a springboard to further investigation.

So what’s the alternative? Anything similar to shallow will have the same connotation. Perhaps we don’t need a distinction at all? Is it really useful to describe our testing in these terms? Most people want a shippable product and don’t give a flying koala what the software testing is called. What’s more, do you hear developers talk about deep coding and shallow coding?

If you really want to classify testing what about the old but familiar black box testing and white box testing?

Enter your email
Subscribe
This month's premium content explores the topic of when to coach, train and mentor a product team. This is important, as how you coach one team differs from another depending on where they're at in terms of owning quality. Situational Quality Coaching (when to coach, train & mentor)Like many things 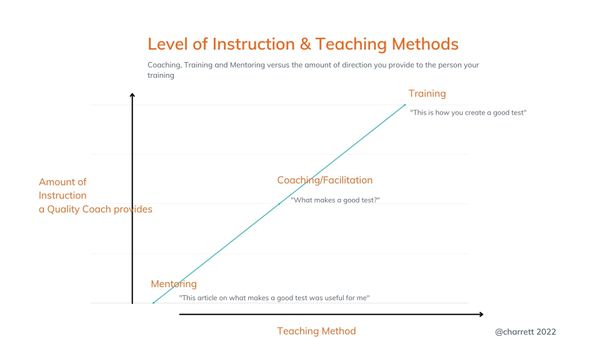 Fun fact, a quality coach doesn't only coach; they also mentor, train and facilitate1. This article explores when to coach, train, and mentor a product team on quality. Coaching, Mentoring, Training Coaching, Mentoring & training are different teaching methods and valuable parts of your quality coach makeup bag. Like many things
Quality Coach Book  Actionable & practical tips on being a quality coach Freshen up your skills This month I've published a mammoth workshop packed full of goodies to help you get started on delivering a team test strategy. This article has got everything from miro boards to a slide deck to